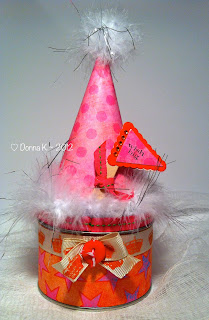 For the past several years I have made some sort of crazy declaration that I would find a use for all of the alterable items that I feel the need to "stock up" on.  Seriously...how many tin mailboxes, paint cans or round tins can one soul possibly use?  Well...I found that I have exactly 9 round tins and I am determined to make something out of every single one of them.  ( I didn't even try to count the other stuff )
The idea for this post struck me as I was browsing some old magazines that were given to me from my friend Dawn at JadeMingmei Designs who has been preparing for a military move.  She cleaned out her studio and her old stuff became my new stuff. 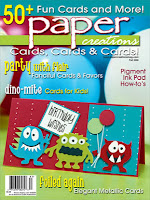 Anyway...I was thumbing through a magazine that I hadn't read before called Paper Creations.  This was actually a Fall 2008 issue and there was a project in there titled "Party Hats" that made me think...WOW...what a great way to use those tins I have stocked up on.  It's on page 34 and like us crafty artists are known to do I changed it up a bit.
I substituted their directions and materials for supplies I had on hand.  I used one of the Celebrations Tins from Michael's that I got on sale umpteen months ago instead of the paper mache boxes they used.  Paper creations used crepe paper for the pom pom, but I loved the boa and used that instead.  The end result was a 4" tin altered inside and out that will make a great gift box or party favor for someone.  I think this little hat would even make an adorable cake topper too.  I can imagine this project in ANY theme or color.  I'm thinking an OVER the HILL one might be next.
So...take a minute and browse your old magazines when you're in a creative rut.  You might be surprised at what you are inspired to make with some of the supplies you have right at your finger tips. 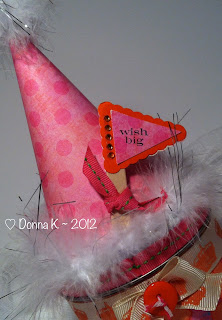 Thanks for allowing me to share my project with you today.  I hope the sun is shining where you are!
~Donna K
altered gifts birthday Donna K paper creations tin

Rasonda @ East Conolly Cottage said…
That is ABSOLTELY adorable. Perfect gift for a girlfriends birthday. Love that you are being frugal and using up some of your stuff on hand.
February 7, 2012 at 12:01 PM

Donna K said…
Thank you for stopping by my blog and for your compliment! I had fun with this project. Who doesn't love a party hat, right?
February 15, 2012 at 9:40 AM